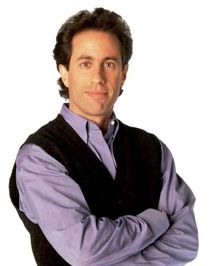 Jerry Seinfeld once said this:

A recent survey found that most people think that public speaking is the scariest thing in the world.
Death is number two.
Death!   Is number two!!
That means that if you're at a funeral,  you'd rather be in the coffin than giving the eulogy.

It's fair to say that many people don't like speaking in public.  That, however, is not an option for this class.  Public Speaking is essential to being a well-rounded, successful person.

Below is a copy of the assignment given in class.  Your job is to create a speech that uses satire.  Your project will be graded on your use of satire, as well as your ability to demonstrate public speaking skills.

Satire is a comedic argument designed to poke at society.  It usually involves someone arguing the opposite of what they believe to show how ridiculous it is.  In this clip, The Onion is making fun of how people complain when a book is adapted into a movie. Watch and see.

I have also attached a PowerPoint on how to speak publicly.  Use this as an example when you create your own PowerPoint and read its useful tips for speaking in front of the class.  This is the same PowerPoint that was used in class.